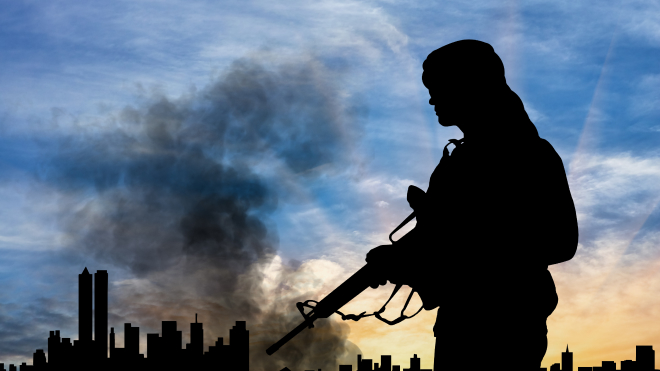 Posted at 09:15h in NOTIONES by admin

Terrorism is a war that can become global, sometimes subtle, with difficult adversaries, not only to identify, but also to indicate, with friends sometimes more uncomfortable than the enemies themselves, fought in secret, but also on live television, suffered, feared, never declared, indeed denied, not wanted, nor felt, but which has already engaged widely and harshly the armed forces and security services of European countries in various operational theaters: in the Balkans, in the Middle East, in Asia and Africa, and now again in the heart of Europe. A war that began some time ago against the West, without rules, began with the methods of propaganda, guerrilla warfare and terrorism on various fronts, not only with striking and bloody attacks, but also exploiting a migratory penetration, which grows exponentially and is changing from within the ethnic and therefore cultural identity of our communities. We have been infected by the culture of hatred of terrorist cells inspired by religious fundamentalism, by suicidal paroxysm, preached and instilled in the minds of young Muslims, educated in some Koranic schools, the “madrassas”, enthusiastic by the exploits of the veterans of the “Islamic” wars in the Balkans, Iraq, Afghanistan, Chechnya, Libya and in Syria, and, even more so, through recruitment sites on the Internet. A historical hatred fueled by the difficult and never completed integration of Muslim immigrants who, although inserted into our societies by the now 2nd and 3rd generation, have rejected them, feel victims of social hardship and therefore end up despising our too free customs and the excesses of consumer materialism.

Today peace can only be an “armed” peace, to be also understood as the continuation of a war by other means, in practice a reverse reading of Clausewitz’s well-known formula or to our war delegated and fought by others. The struggle is between the West, which seeks balance, stability, consolidation and the spread of acquired well-being, and the various multinationals of terror allied in the “holy war” against the common “Christian” enemy, but often also in struggle with each other in a contrast not only religious and ideological, but also political and military. A struggle that does not attenuate or limit the truculent ferocity of terrorist and fundamentalist groups of different inspiration, but rather exalts it in an absurd race of ruthlessness. These groups have organized themselves as transnational militias with the overt and covert support and help of some “rogue” states, with whom they share the political interest in destabilization in areas strategically vital for energy resources and commercial importance. The greatest danger comes to us above all from the influence exerted by some states led by autocratic and despotic governments which, among other things, use terrorism and their military resources to achieve their expansive aims. They therefore operate with procedures, logic and absolute lack of scruples, typical and very similar to those of criminal organizations, sometimes interacting or identifying with them, controlling or managing illegal activities and trafficking (weapons, drugs, illegal immigration, etc.) and using the proceeds to finance themselves in a perfect operational symbiosis and total commonality of interests. Terrorism on a planetary level, with the brutality of suicide bombings, beheadings, indiscriminate massacres, aims to shake our societies from the same foundations, threatens our system of life and makes us insecure with the war of fear, a media and psychological war, even before military, conducted through an increasingly sophisticated use of the Internet. The purpose of the terrorists, and of those who support and finance them, is therefore to destabilize and create the conditions for overthrowing governments, more or less moderate and democratic, allied or close to Western powers, to take control of important energy sources, to condition the world economy, in short, to achieve global power in the name of one’s own religious or nationalist fanaticism. To achieve their goals they constantly and promptly update their tactics and strategies, bringing their attacks in a preordained and organized way with a system that we can define as “communicating vessels”, because it concentrates the maximum offensive capacity from one region to another, from city to city, from nation to nation. They thus choose to strike in place and time at the most remunerative, vulnerable and flashy target, the most delicate political situation and the opposing forces numerically and qualitatively lacking and therefore less effective, forcing them to continuous changes in their defensive, military and police policies. The consequent actions of contrast are so often late and not very effective, sometimes even counterproductive. They also exploit the orographic impracticability of some regions and areas, taking advantage of the precariousness, weakness and corruption of local governments, conditioned and infiltrated by extremists and fundamentalists. The growing danger, the ramification and the capillarity of the terrorist threat therefore act as a detonator to undermine an already difficult and precarious world balance, especially after the disintegration of the Soviet empire and the evident desire for revenge of Russia. In fact, we have witnessed and now we are witnessing with fear and horror the rekindling of wars and conflicts of different types, levels and intensity, local or regional, which were previously dormant, contained, controlled and in any case limited by the opposition of the two opposing global powers, frozen by the terror of a nuclear confrontation that would lead to the total destruction of the planet. In particular, Europe today lives a state of great concern that does not regard only the Eastern nations most exposed to the risks of war, but also many countries inside the same Europe, in Middle East and Asia.